With every fraction of a degree of global warming, climate change impacts will intensify. In the latest installment of the Intergovernmental Panel on Climate Change’s (IPCC) Sixth Assessment Report, 278 scientists from 65 countries find that the world should peak GHG emissions in the next three years to preserve our chances of meeting the Paris Agreement’s 1.5 degrees C (2.7 degrees F) target.

Coming on the heels of two previous reports focused on the physical science of climate change and its impacts, this report from Working Group III concentrates primarily on mitigation, or reducing greenhouse gas (GHG) emissions and removing carbon dioxide (CO2) from the atmosphere. Analyzing over 18,000 studies published since the IPCC’s Fifth Assessment Report in 2014, the world’s leading climate scientists identify pathways to limit global warming to 1.5 degrees C, among other temperature thresholds, as well as assess the feasibility, effectiveness and benefits of different mitigation strategies.

Here are six key findings from the IPCC’s report on climate change mitigation:

1. Global GHG emissions have continued to rise, but in pathways that limit warming to 1.5 degrees C, they peak before 2025.

While there are some signs of progress — the annual rate of GHG emissions growth declined from an average of 2.1% between 2000 and 2009 to 1.3% between 2010 and 2019, and 24 countries have sustained their GHG emissions reductions for over a decade — global efforts to mitigate climate change remain far off-track.

For example, even if countries achieve their most recent national climate commitments (NDCs), the gap between global GHG emissions and the level associated with limiting warming to 1.5 degrees C would be 19-26 GtCO2e in 2030. This is more than the 2018 emissions from the United States and China combined. While some countries have announced new or enhanced NDCs since the IPCC’s cut-off date, these pledges are not ambitious enough to close the gap.

The IPCC shows that in pathways that limit warming to 1.5 degrees C (with no or limited overshoot), just a net 510 Gt of CO2 can still be emitted before CO2 emissions reach net zero around mid-century (2050-2055). Yet future CO2 emissions from existing and planned fossil fuel infrastructure alone could reach 850 Gt — 340 Gt more than that limit. 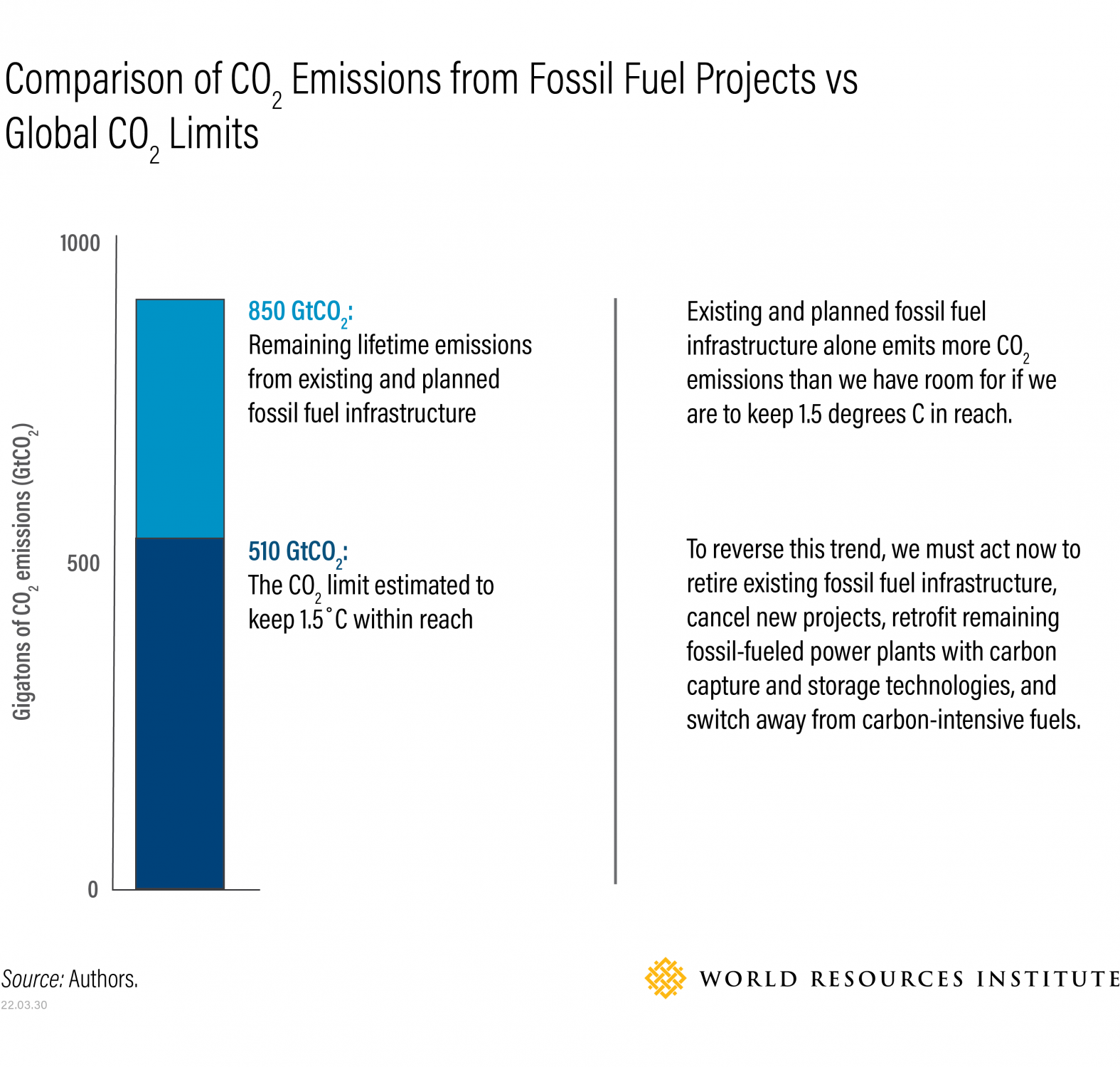 Although coal-fired power plants are beginning to be retired across the United States and Europe, some international development banks are still investing in new coal capacity. Failure to change course will result in trillions of dollars of stranded assets.

3. We need rapid transformations across all systems to avoid the worst climate impacts.

GHG emissions have risen across all major systems since last assessed. The IPCC finds that reversing course will require decision-makers in government, civil society and the private sector to prioritize the following actions, many of which pay for themselves or cost less than $20 per tonne of CO2e: 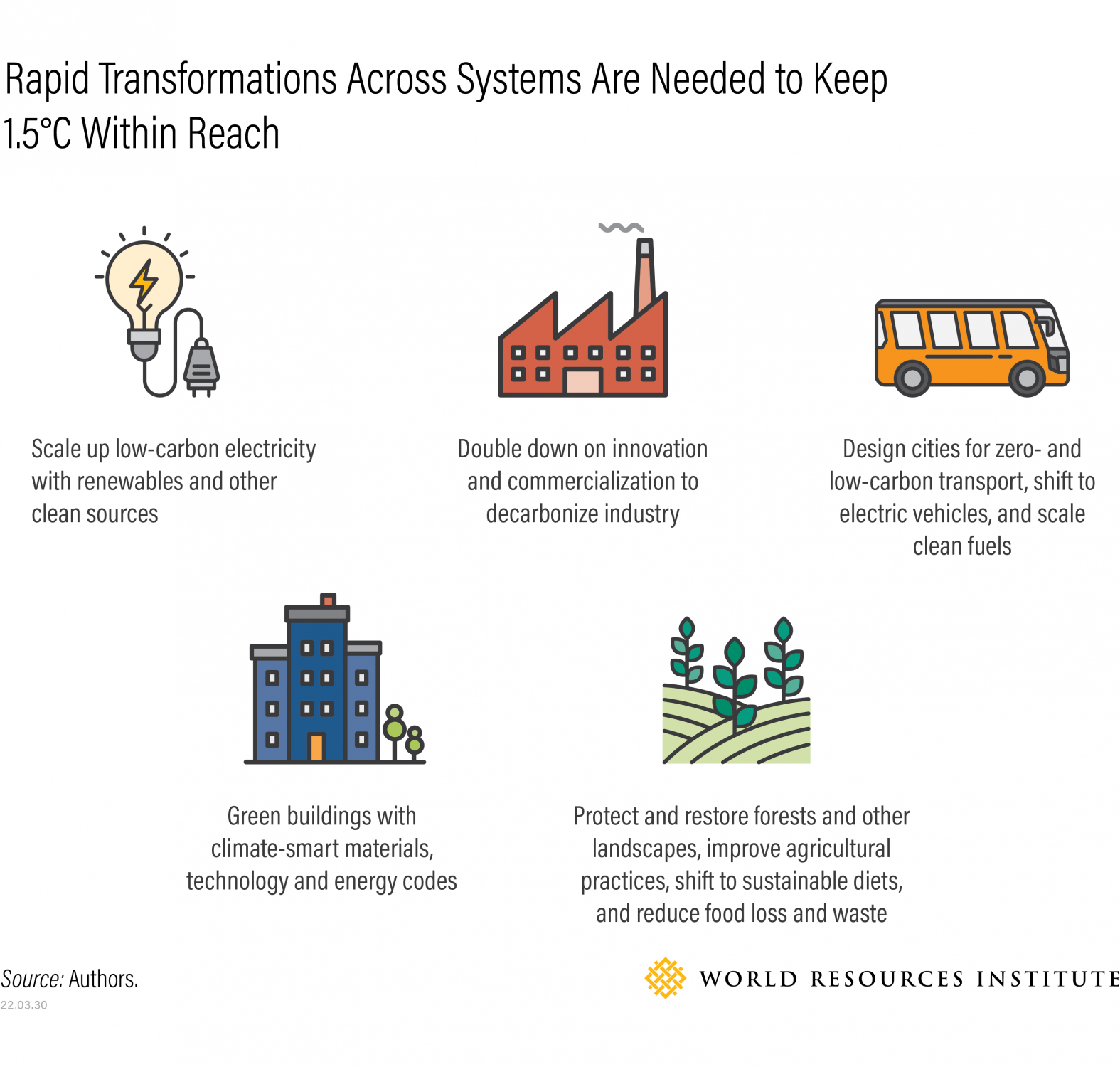 If well-designed and effectively implemented, many of these mitigation strategies can generate critical co-benefits for sustainable development. Conserving natural landscapes, for example, can support nearby households’ livelihoods, bolster food and water security, and protect biodiversity. But not all efforts to reduce emissions or remove carbon will deliver win-wins for both climate action and development. When managed poorly or implemented inappropriately, these actions can disrupt local economies, exacerbate existing inequities, and displace communities, among other unintended consequences. The IPCC finds that managing these tradeoffs through inclusive, transparent, and participatory decision-making processes can cultivate social trust, as well as deepen public support for transformative climate action. Doing so can also help ensure that transitions to a net-zero future are just and equitable.

4. Changes in lifestyle and behaviors have a significant role to play in mitigating climate change.

Worldwide, households with incomes in the top decile, which includes a large share of households in developed countries, are responsible for 36-45% of total GHG emissions, while families earning in the bottom 50% account for just 13-15%. Achieving universal access to modern energy for the world’s poorest, the IPCC further finds, would not significantly impact global emissions.

But shifting consumption patterns, particularly among the world’s wealthiest, can slash GHG emissions by 40-70% by 2050 when compared with current climate policies. Walking or cycling, avoiding long-haul flights, shifting to plant-based diets, cutting food waste, and using energy more efficiently in buildings are among the most effective demand-side mitigation options.

Similarly, how sustainable options are presented to consumers (also known as “choice architecture”) can help nudge people toward low-emissions goods and services. For example, including vegetarian dishes alongside meat entrées on menus, rather than in separate vegetarian sections, can help increase consumption of plant-based meals.

5. Limiting global temperature rise to 1.5 degrees C will be impossible without carbon removal.

The IPCC found that all pathways that limit warming to 1.5 degrees C (with no or limited overshoot) depend on carbon removal. These approaches can include both natural solutions, such as sequestering and storing carbon in trees and soil, as well as technologies that pull CO2 directly out of the atmosphere.

The amount of carbon removal required depends on how quickly we reduce GHG emissions across other systems, and the extent to which climate targets are overshot, with estimates ranging from 5-16 GtCO2 per year by mid-century.

In the near-term, restoring natural carbon sinks like forests is a relatively cost-effective, readily available carbon removal approach that, when implemented appropriately, can deliver a wide range of benefits to nearby communities. Yet carbon stored in these ecosystems is also vulnerable to disturbances like wildfires – disturbances that will only intensify in a changing climate and release stored carbon back into the atmosphere.

Given the scale of carbon removal required in some 1.5 degree C pathways, as well as concerns about the impermanence of natural sinks, the world will likely also need carbon removal technologies. Currently, these innovations are relatively nascent and come with a variety of challenges and risks. Scaling up biomass crop production for the deployment of bioenergy with carbon capture and storage (BECCS), for example, may displace croplands, and in doing so, threaten food security and spur additional deforestation.

Responsibly developing and deploying carbon-removal technologies, alongside natural approaches, will require a better understanding of each innovation’s unique benefits, costs and risks. The need for increased finance for research, development and deployment is urgent.

6. Climate finance for mitigation must be 3 to 6 times higher by 2030 to limit warming to below 2 degrees C.

Annual public and private finance for climate change mitigation and adaptation rose by up to 60% from 2013 to 2020. However, these gains have slowed in recent years, and to make matters worse, the IPCC found that finance for fossil fuels still outstrips funding for climate action.

This misalignment of global capital has resulted in a substantial shortfall between current levels of climate finance and those needed to mitigate climate change, which persists across all regions and all sectors. This gap is widest in developing countries, particularly those already struggling with debt, poor credit ratings and economic burdens from the COVID-19 pandemic. Investors’ tendency to channel greater shares of capital into their own countries, as well as the systemic underpricing of climate risks, pose additional challenges for scaling up private finance across these nations.

Recent mitigation investments, for example, need to increase by at least five-fold in Southeast Asia and developing countries in the Pacific, seven-fold in Africa and 12-fold in the Middle East by 2030 to hold warming below 2 degrees C (3.6 degrees F). And across sectors, this shortfall is most pronounced for agriculture, forestry and other land use, where recent financial flows are 10 to 29 times below what is required to achieve the Paris Agreement’s goals.

Where Do We Go from Here?

As this latest IPCC report makes clear, holding global temperature rise to 1.5 degrees C is still possible, but only if we act immediately. The world needs to peak GHG emissions before 2025, nearly halve GHG emissions by 2030, and reach net-zero CO2 emissions around mid-century, while also ensuring a just and equitable transition. With escalating risks from droughts, floods, wildfires and other disastrous effects of climate change, these are deadlines we simply cannot afford to miss.

Why net zero without a ‘just transition’ is not an option

Funding Our Future: Clean Hydrogen Hub Offers Major Opportunity — If We Do It Right

What is Blue Carbon and How Does it Help Climate Change?