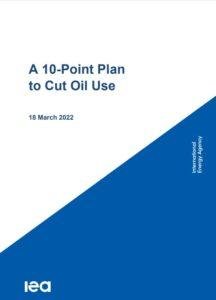 Russia’s invasion of Ukraine has thrown global commodity markets into turmoil. The global oil market – in which Russia is a major force – is one of the most heavily affected. Russia is the world’s third largest oil producer and the largest oil exporter.

Significant strains are showing in the global oil market, compounding difficulties in natural gas markets and creating a looming emergency for global energy security. Oil prices have swung violently since the Russian invasion, with the global benchmark nearing the all-time high of USD 150 per barrel at times, putting the still fragile and uneven global economic recovery at risk. The United States and Canada are banning imports of Russian oil while the United Kingdom has announced plans to do so by the end of the year. The IEA’s latest Oil Market Report on 16 March identified the potential for a shut-in of 2.5 million barrels a day of Russian oil exports starting from April; but losses could increase should restrictions or public condemnation escalate. A prolonged period of volatility for markets appears likely.

More than half of Russia’s oil exports go to Europe and around 20% go to China, but the market is global, meaning changes in supply and prices affect everyone. The increases in prices are being felt everywhere. Even if the price of oil on international markets has not so far risen as high as the all-time record reached in 2008, currency exchange rates mean that the price at the pump is at the highest level ever in some countries. On average, monthly spending on oil products for transport and heating in January and February rose by more than USD 40 per household (nearly 35%) in advanced economies, and nearly USD 20 per household (over 55%) in emerging and developing economies compared with last year’s levels. With the potential loss of large amounts of Russian supplies looming, there is a real risk that markets tighten further and oil prices escalate significantly in the coming months as the world enters the peak demand season of July and August. The risks are most acute – and already being felt in some cases – in market segments where Russia is a major supplier, such as diesel.

Fossil gas: a bridge to nowhere