Originally posted in The Business Standard on 20 March 2022 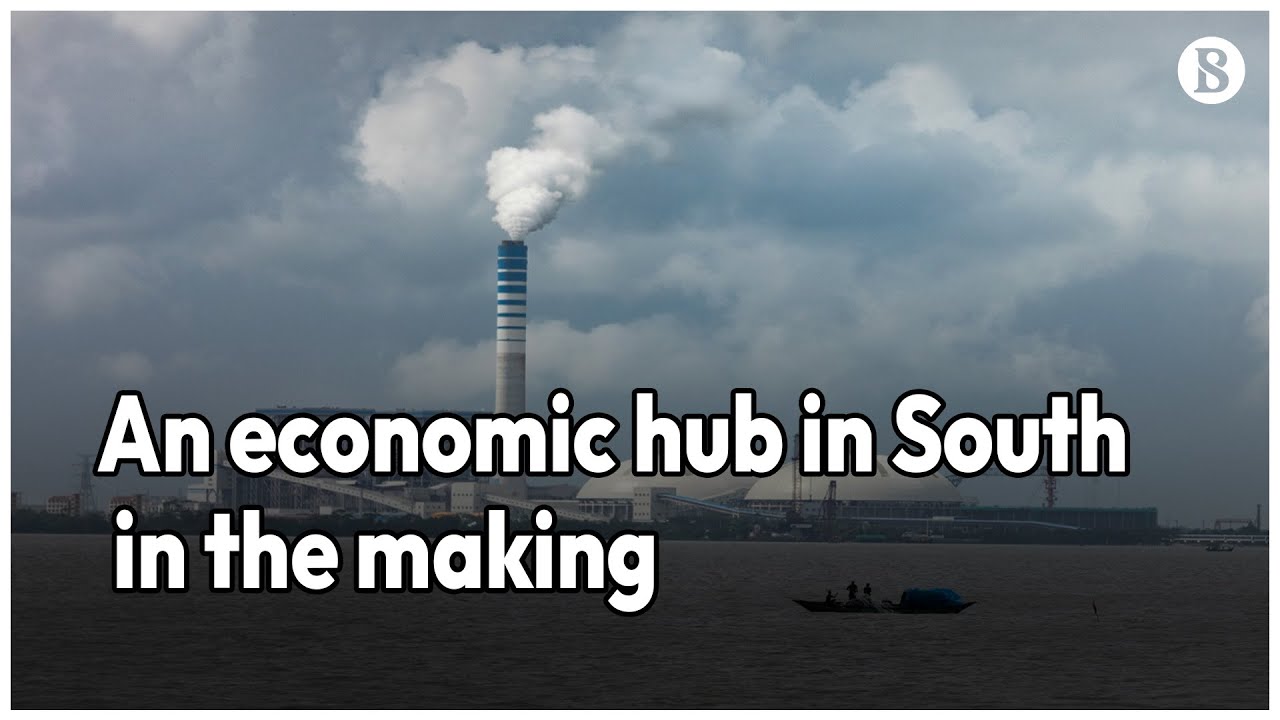 From Payra, Patuakhali: In an awe-inspiring development, the coastal neighbourhoods of Payra and the “daughter of the sea” famed Kuakata in Patuakhali – a southern district that has thus far remained on the periphery of mainstream Bangladesh’s sub-conscious – are gradually taking their place in the driver’s seat in the country’s journey of economic growth.

The area is poised to become a nucleus for regional communication and trade with India, China, Bhutan, and Sri Lanka once the government’s ambitious rail and road projects centring the southern region are implemented.

Payra has the potential to become an important port as a transit point on the Silk Route by sea and a global trade hub as the government plans on building the region as one of the major economic corridors of the country by establishing direct road and rail communications with the capital Dhaka and the rest of the country and thus establishing connectivity with India, Sri Lanka, and Bhutan.

Besides, the country’s biggest coal-fired power plant has been set up in Payra. The construction of a 163-kilometre transmission line from the power station to Gopalganj grid has already been completed while the construction of a 75km line from Gopalganj to Aminbazar of Dhaka is in progress and slated for completion by December this year.

The electricity generated at the plant is being supplied through submarine cables to 25,358 households in various chars of Rangabali upazila, Patuakhali, which is surrounded by the sea and rivers. Through this, the government is inching towards achieving the target of 100% electrification.

At present, 1,000MW of power is being generated experimentally from this 1,320MW plant.

Prime Minister Sheikh Hasina is scheduled to officially inaugurate the power plant, constructed at a cost of around Tk20,000 crore, in the southern district on Monday. The electricity generated at the plant will be added to the Dhaka grid by next December.

While briefing the media at Payra Power Plant on Sunday afternoon, State Minister for Power Nasrul Hamid said, “It was a challenge for everyone. The most remarkable thing is that this project has been completed ahead of schedule and saved $100 million. This is why this project is unique in many ways.”

Bangladesh has not implemented such a large and state-of-the-art project in the past 50 years, the minister said, adding that the one in Payra is the third power plant in Asia and the eleventh in the world to use ultra-supercritical technology.

Two coal/bulk terminals have been constructed at Payra port to supply coal to the plant. Another coal terminal was supposed to be built under the public-private partnership (PPP) arrangement but was annulled last month by the Cabinet Committee on Economic Affairs.

In addition, the government has plans to supply gas discovered in Bhola and to import fuel oil and gas to Payra by laying pipelines from refineries in the Indian state of Assam. If the government’s plans to build a liquid bulk terminal, an LNG terminal, and a fuel oil refinery are implemented, Payra will become a power and fuel hub just like Matarbari in Cox’s Bazar.

The government is also planning to establish a special economic zone and an airport to realise its dream of making the country a developed one, attracting investments to Payra, and establishing Kuakata as a world-class eco-tourism centre within the next two decades.

Moreover, the setting up of a garment industrial estate, shipbuilding and repair industries, a container building terminal, pharmaceutical industries, a fish processing zone, and a fertiliser factory is also planned around the Payra port – built on about 6,000 acres of land.

Payra port was partially opened in 2019 with the anchoring of a ship carrying imported goods. In the past two years, the port authorities handled the cargoes of 170 ocean-going foreign vessels.

Constructions of a modern 650-metre main jetty and a 325,000-square metres backup yard are expected to be completed by this December. Initiatives have been taken to construct a connecting road to the terminal. The port authorities estimate that a full-scale operation of the port will lead to a 2% increase in the country’s gross domestic product (GDP).

The Payra port is being constructed at an estimated cost of about Tk15,000 crore and is expected to be complete next year. Once it starts functioning as a full-fledged port, it will be able to handle 50 ships a day. The government expects the port will help reduce the existing container handling costs by two-thirds.

A tourism-based 20-year comprehensive master plan is being formulated centring Payra and Kuakata under the leadership of Tofazzal Hossain Miah, senior secretary to the Prime Minister’s Office. As per the master plan, modern tourism infrastructures will be built ensuring well-planned-out urbanisation to make Payra one of the key drivers in establishing a developed Bangladesh by 2041.

People concerned said that even though the government has moved away from the decision to set up a deep seaport, traders in the south and south-west of the country, including those in Dhaka, are getting increasingly hopeful about the Payra port as there is an opportunity to anchor mother vessels at the port since it is deeper than those in Chattogram and Mongla.

Khorashed Alam, managing director of Bangla-China Power Company that is in charge of setting up and operating the Payra power plant, said the prime minister herself selected the site for the plant as coal transport to this place surrounded by three rivers is easy.

Bangabandhu emphasised a balanced development of the country and his daughter, Prime Minister Sheikh Hasina, is confirming that by constructing this power plant, he said.

There is no risk of environmental pollution from the thermal power plant, he claimed, adding that the latest ultra-supercritical technology has been used in the project. “This has increased the project cost by 5-7% but we bore it for the sake of protecting the environment.”

The main reason for building coal-fired power plants is to generate electricity at a low cost. Cheap electricity will be available from this plant for the next 25-30 years.

But, bringing ships carrying 40,000-50,000 tonnes of coal is a challenge, he noted, adding the Payra port authorities are working to address this issue. “Hopefully, this will be possible by 2023-24.”

At present, 550-600MW of electricity generated at Payra power plant is going to Gopalganj substation while some is being supplied to the Patuakhali substation. Jashore and Khulna are expected to be connected to the transmission line next month. And once the construction of Gopalganj-Aminbazar transmission line is completed by December, the electricity generated in this plant will reach Dhaka.

No other country in the region has achieved 100% electrification, said Khorshed, adding that it will play a big role in the socio-economic development of the country.

The government is constructing another 1,320MW power plant at Payra, the implementation progress of which is 22%.

Khorshed said the construction of the new plant will be completed in 2024.

Because of its backwardness in communication infrastructures, the entire Barishal division, including Patuakhali, lags behind even the northern divisions of Rajshahi and Rangpur in terms of economic activities. According to the 2013 economic census of the Bangladesh Bureau of Statistics, the total number of economic establishments in the country that year was more than 78 lakh and Sylhet, Barishal, and Khulna had the lowest numbers of such establishments. The number of economic establishments in Rangpur was more than 10 lakh, but it was about 3.5 lakh in Barishal.

The pitiable condition of Barishal division has started to change thanks to the constructions of the Padma Bridge and the Payra Port. Over the past several years, Payra Bridge, Sheikh Jamal Bridge, Sheikh Kamal Bridge, and Sheikh Russell Bridge have been constructed on the Barishal-Patuakhali-Kuakata Highway and the region will have direct road connectivity with the rest of the country, including Dhaka, once the Padma Bridge is launched this June.

Encouraged by the development of communication infrastructures and the government’s development plans centring the Payra port, large industrial groups are buying land in the Jajira-Kuakata, and Barishal-Mongla-Khulna areas for investment.

The government is working not only for the implementation of mega projects but also for the rehabilitation of poor families in the region. In the Mujib Year, 29 families from the gypsy Manta community have been rehabilitated in Char Mantaj under the Ashrayan project. Officials said construction work on 31 more houses for the community is underway and that 96 families will be rehabilitated at the char in phases. Earlier, the birth, life, and death of this landless community were all in small boats.

Nayan Tara, who got a house in Char Mantaj, told The Business Standard that she was born in a boat and spent 70 years of her life in the boat. “Now I have found a home and found peace,” she said.

Another beneficiary, named Rokeya Begum, said, “Small children would die by drowning after falling into water from boats, which is why they had to be tied to the boats with ropes. Casualties often took place if the guardians forgot to tie their children to the boat. Now there is no such fear.”

Barishal Divisional Commissioner Md Amin Al Ahsan told TBS, “A development extravaganza is going on in the entire Barishal division centring the Payra port and the Padma Bridge. Land has been selected for an economic zone in Patuakhali. Its acquisition process is in progress.”

The economic zone is important to make the port vibrant, he said, adding, “Besides, the demand for economic zones is also high among domestic as well as foreign investors. Many companies are setting up industries by buying land on their own initiatives. Payra will have a solar plant. The area will become an energy hub in the next 5-10 years.”

He continued to say land acquisition for a 4-lane road from Bhanga to Kuakata is underway. Work on rail communication will also start soon. All internal roads of the Barishal division are being developed. A planned tourism hub will be developed including Kuakata and surrounding areas.

The entire economic landscape of the region will change in the next five years, he hoped.