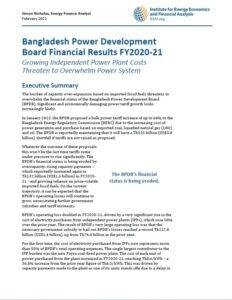 The burden of capacity over-expansion based on imported fossil fuels threatens to overwhelm the financial status of the Bangladesh Power Development Board (BPDB). Significant and economically damaging power tariff growth looks increasingly likely.

In January 2022, the BPDB proposed a bulk power tariff increase of up to 64% to the Bangladesh Energy Regulatory Commission (BERC) due to the increasing cost of power generation and purchase based on imported coal, liquefied natural gas (LNG) and oil. The BPDB is reportedly maintaining that it will have a Tk325 billion (US$3.8 billion) shortfall if tariffs are not raised as proposed.

Whatever the outcome of these proposals, this won’t be the last time tariffs come under pressure to rise significantly. The BPDB’s financial status is being eroded by overcapacity, rising capacity payments – which reportedly increased again to Tk132 billion (US$1.5 billion) in FY2020- 21 – and growing reliance on price-volatile imported fossil fuels. On the current trajectory, it can be expected that the BPDB’s operating losses will continue to grow, necessitating further government subsidies and tariff increases.

BPDB’s operating loss doubled in FY2020-21, driven by a very significant rise in the cost of electricity purchases from independent power plants (IPPs), which rose 58% over the prior year. The result of BPDB’s very large operating loss was that the necessary government subsidy to bail out BPDB’s losses reached a record Tk117.8 billion (US$1.4 billion), up from Tk74.4 billion in the prior year.

Fossil gas: a bridge to nowhere