Originally posted in The Financial Express on 27 February 2022

Bangladesh begins counting the cost in higher import bills as oil and gas prices on the international market soars in a fallout from the raging war between Russia and Ukraine, in the energy-rich belt.

The BPC is now counting loss worth around Tk 150 million per day, in terms of ruling market rate of Brent crude, the benchmark in international oil price, at US$ 100 per barrel, a senior official of the corporation told the FE Saturday.

The crude price went as high as US$105 per barrel on Thursday, when the war finally broke out despite western sanctions against Russia and forewarnings of retaliation by the US-led NATO which had moved to draw Ukraine into the military alliance.

The state-run Petrobangla is also counting extra money for purchasing liquefied natural gas (LNG) from the international market as its buying price is linked with the Brent-crude price, say the sources.

Petrobangla’s LNG-purchase price from long-term suppliers soared to around US$ 14 per-million British thermal unit (MMBTU), which was hovering around US$11 per MMBTU over the past month during the pre-war period.

Bangladesh, however, has not yet purchased any LNG cargo from the overheating international spot market after the commencement of the Russia-Ukraine war. 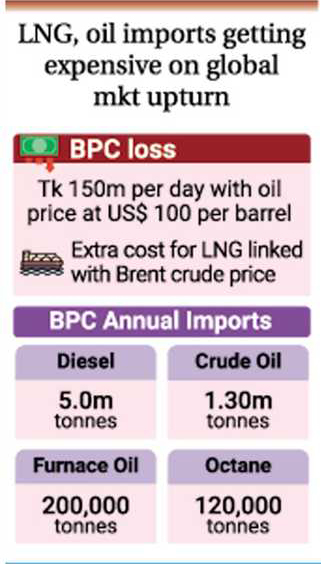 Petrobangla purchased one LNG cargo from spot market early February at a price worth around US$30 per MMBTU.

Petrobangla and state-owned gas-marketing and-distribution companies have already sought to double the domestic natural gas prices on the back of surging LNG prices.

At current prices the BPC is counting loss worth around Tk 10 per litre in diesel trading.

”If the uptrend in the international market lasts long, the BPC’s losses will increase further,” says one official.

The Brent-crude price surged past US$100 per barrel for the first time since 2014 amid global market volatility buoyed by limited inventory and the dogged Russia-Ukraine battles.

The crude rate was around US$ 82 per barrel on November 4, 2021 when the prices of diesel and kerosene were raised by around 23 per cent to Tk 80 per litre from previous Tk 65.

After the hike in the domestic rates, the prices of petroleum products on the international market, however, continued to fall until December 2, 2021, helping the BPC earn profit.

Commensurate with the downturn, the BPC slashed the furnace-oil price by Tk 2.0 per litre or 3.22 per cent to Tk 60 per litre from previous Tk 62 per litre with effect from December 16, 2021.

Oil price on the international market had seen the steepest fall during the acute coronavirus pandemic after March 2020 that had upended normal life and business with people quarentined under lockdowns.

During the price fall, the corporation bagged a profit of around Tk 16 per litre in diesel and Tk 5.50 per litre in trading respective petroleum products on the domestic market.

The BPC alone procures around 85 per cent of the country’s oil requirement, with the rest brought by the private sector.