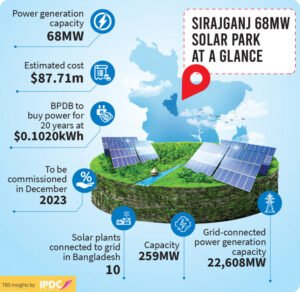 Originally posted in The Business Standard on 9 January 2023

The Bangladesh Power Development Board (BPDB) is going to purchase electricity from Sirajganj 68 megawatt solar park for 20 years at $0.102 per kilowatt hour (kWh).

The solar park project, currently under construction and being implemented by the Bangladesh-China Renewable Energy Company Limited, is scheduled to be commissioned by December 2023.

The project is being implemented at an estimated cost of $87.71million, which will be financed by the joint venture company with a 50:50 ratio.

Bangladesh-China Renewable Energy was formed on 1 September 2020 in order to install 500MW solar and wind power plants in various locations of Bangladesh.

The 68MW solar park in Sirajganj is the first of these projects. On 24 February 2022, Bangladesh-China Renewable Energy signed the engineering procurement contract with the Chinese state-owned hydropower engineering and construction company Sinohydro to implement the project in Sirajganj Sadar upazila.

“We are trying to implement some solar projects with 2000MW capacity as fast as we can. And the project with 1500MW capacity is now under pipeline,” he said.

However, grid stabilisation with this power is the big challenge, Nasrul Hamid added.

On the side-lines of the contract signing ceremony, Nasrul Hamid said the government is working on a plan to introduce a system for adjusting power and energy prices every month.

He also said there is no relation between the government’s move and the public hearing of the Bangladesh Energy Regulatory Commission (BERC).

“The BERC will do its own job and make their decisions. We have amended the BERC rules so that we could adjust prices every month,” he said.

“Already our neighbouring countries have introduced the monthly price adjustment system,” he added.

While delivering the welcome address, AM Khurshedul Alam, managing director of Bangladesh-China Renewable Energy said power purchase agreement for the Pabna 64MW is in the final stage.

Besides, the company has plans to implement some renewable projects including Payra 50MW wind power plant,” he said.

At present, the country has nine grid tied solar power projects with a capacity to generate 260MW electricity while the total installed capacity of the grid tied plants’ is 22,608MW.