Originally posted in The Business Standard on 11 April 2022 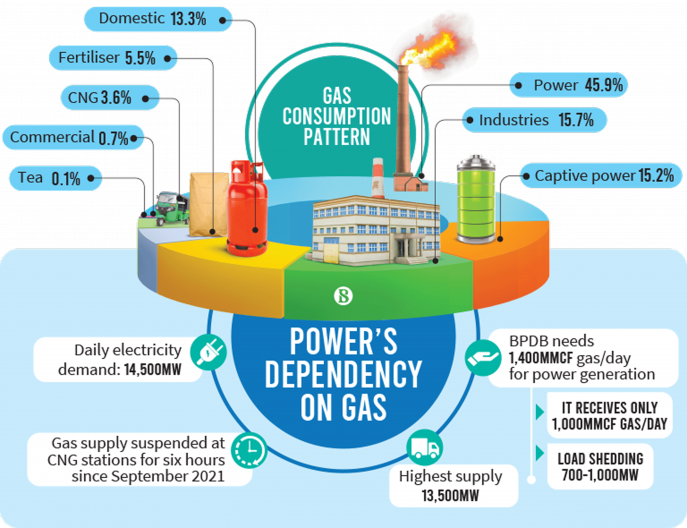 After having ordered CNG filling stations to remain closed for six hours a day, the government has now decided to ration gas supply to all industries, including forex-earning textile and readymade garment industries from 5pm to 9pm daily for 15 days amid a crisis in Ramadan.

In a circular issued on Monday, the Bangladesh Oil, Gas and Mineral Corporation (Petrobangla) asked factories to stop using gas for four hours every day till 26 April from Tuesday.

But the gas supply cut-off order has raised concerns among factory owners.

They fear that production of spinning, dyeing and washing factories will be severely affected owing to gas supply suspension, and exports of readymade garments will suffer a blow too.

The authorities took the decision amid a huge outcry of consumers over power outages, especially in rural areas under Palli Bidyut Samities under the Bangladesh Rural Electrification Board.

Industrial clients will have to switch off gas connections during the period and distributors will monitor whether they comply with the suspension order.

The government had earlier ordered the CNG stations to remain closed from 5pm to 11pm every day until Eid-ul-Fitr to ensure supply to the power plants during Ramadan.

Petrobangla Chairman Nazmul Ahsan told The Business Standard that the decision was taken to supply required gas to power plants in order to ensure uninterrupted electricity in Ramadan.

The decision came a day after Prime Minister Sheikh Hasina asked officials of the power and energy sectors to discuss the current power supply situation.

In the meeting, she told the officials to ensure uninterrupted power supply on a priority basis during Ramadan, said a source who participated in the meeting.

She also directed electricity supply utilities to encourage lower consumption during peak hours by controlling the use of air conditioners at shopping malls and other facilities.

Source at the Bangladesh Power Development Board (BPDB) said the country now has a total need of 15,000 megawatts of electricity at peak hours – 5pm to 11pm – owing to temperature rise and high demand for pumping of groundwater for irrigation.

To generate the required electricity, the power sector needs around 1,400 million cubic feet (mmcf) of gas every day.

But the power sector receives only 950mmcf to 1,000mmcf gas a day. Therefore, the sector faces a shortfall of 500-700MW across the country, said sources at the BPDB.

Meanwhile, the gas rationing decision worries industry owners before Eid-ul-Fitr, the largest festival in the country.

Before taking the decision on Monday, the state minister for power, energy and mineral resources sat with the stakeholders and industry owners to discuss the current situation and find a way out.

Entrepreneurs fear production of spinning, dyeing and washing factories will be severely affected because of the sudden decision to cut off gas supply to factories for four hours.

The country’s industrial areas have been facing a gas crisis for the past few days. As a result of the gas supply suspension, gas-dependent industries, especially textiles, along with dyeing, washing units, ceramics, steel industries and others will suffer more.

“If we had been told about it beforehand, we would have had the opportunity to prepare for it,” he said.

Production at spinning, washing and dyeing will be hampered, so will exports eventually, he added.

Explaining the impacts, he pointed out, “If our production faces disruptions because of the gas supply cut-off, we will not be able to ship goods to buyers on time. Then, we will have to resort to air freights at several-fold high fares to meet shipment deadlines; otherwise, orders will be cancelled and buyers’ confidence in us will be shattered.”

The production loss during the period will eat up profits earned throughout the year, he noted.

Fazlul Haque, managing director at Narayanganj-based Plummy Fashions Ltd, and former president of BKMEA, said “We cannot afford to stop using gas for four hours a day at my own dyeing unit. One batch of the three batches a day [one batch for eight hours] needs to be kept off, which will naturally reduce production by one-third.”

Exports might come into a negative trajectory. But this month they have to pay salaries and bonuses, he also said.

“It is not a good sign,” he said, noting that foreign buyers may be worried about timely deliveries of goods.

According to the BTMA, there are more than 1,500 textile mills, including spinning, weaving, dyeing and finishing. Investment in this sector amounts to more than $6 billion.

Over 86% of export earnings comes from textiles and related products, it adds.

BTMA President Mohammad Ali Khokon said another investment of $2.5 billion is coming in the textile sector as exports of readymade garments continue to grow.

However, he told TBS, the ongoing gas crisis and discussions on raising gas prices are discouraging new investments in the sector.

Those who are going to invest are also now worried about the growing gas crisis, the BTMA president added.