Originally posted in The Business Standard on 02 March 2022

Oil crossed $111 a barrel, highest since 2014, and the price might shoot even higher if Russia stops oil exports 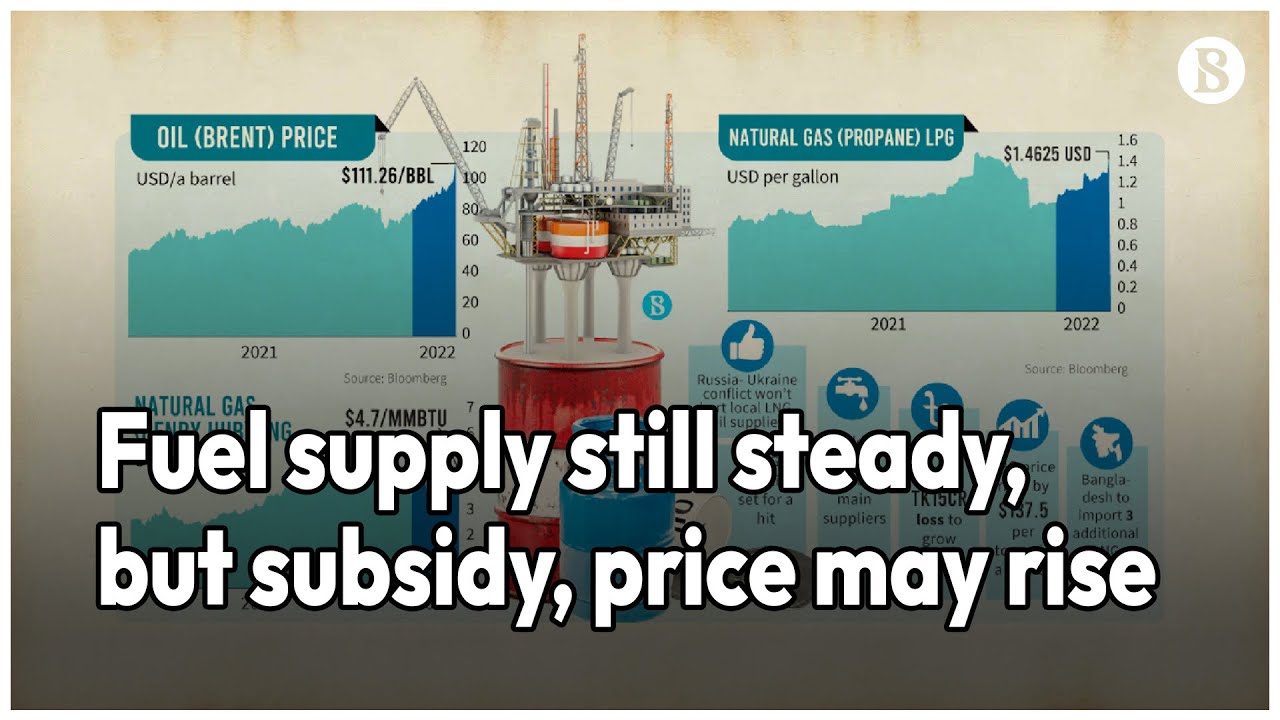 The Ukraine war, which has already caused energy prices to shoot up and started a new supply crunch, might not affect Bangladesh fuel imports in the short term owing to several timely government initiatives; but a prolonged war poses a major financial and supply threat.

The heat of the war is still lukewarm for Bangladesh as the country is sourcing its petroleum and Liquefied Natural Gas (LNG) from the Middle East and other Asian countries.

But the war has already hiked energy prices to a new record worldwide. This is set to mount huge pressure on the government in the coming months. If the war prolongs, the supply risk and cost burden on Bangladesh might become unbearable.

A disruption of LNG and oil supplies at this point of time means Bangladeshi industries and exports would be disrupted.

The price of oil crossed $111 dollars a barrel – the highest since 2014. And this price might shoot even higher if Russia stops oil exports in the wake of various sanctions imposed by the European Union.

“If the war continues, a huge amount of money will go into subsidies on fuel. However, it is not possible to estimate how long the war will last. We are monitoring the international market. Hopefully, there won’t be a prolonged war,” an additional secretary of the finance division told The Business Standard.

Although Bangladesh remains sheltered from the fallout so far as it is mainly reliant on the Middle Eastern and Asian countries for its fuel, a crisis may still be looming in the future.

The supply of Liquefied Petroleum Gas (LPG) by private operators may be hit due to delays in delivery. Azam J Chowdhury, director of Omera Petroleum Limited, one of the largest LPG operators of the country, said that they have already noticed delays in shipment.

“Due to sanctions on Russia, the contributor of 12.2% of the world’s total gas production and number two exporter of gas, supply has dropped and demand jumped. Therefore, deliveries are getting delayed,” said Azam J Chowdhury, who is also the president of the LPG Operators Association of Bangladesh.

Furthermore, European buyers may shift from Russia towards the Middle East for their oil needs, eating into the supply chain Bangladesh relies on.

In addition, regardless of supply insulations, a rise in the price of energy due to the war will be felt by consumers in Bangladesh as well.

In November, the government increased the price of diesel and kerosene by Tk 15 per litre at a time when price in the international market was $80 per barrel. Now as the price stands at $110, hikes in the local market are also expected.

“If the war continues for several months and Russia cuts off oil supplies to Europe in retaliation, a decision will have to be made on managing the subsidy pressure. However, these issues have not been discussed at the policy level yet,” the additional secretary of the Finance Division said.

“If the price of fuel oil goes up, so will inflation. Because, it is the main component in the production and transportation of all commodities, including agricultural products, worldwide. However, the LNG crisis has not yet hit the international market and the price is close to $30,” he said.

The official also said that the impact of the war would be felt across a range of exports and imports, apart from oil.

He said that if Russia reduced its fuel supply to Europe, it would have a negative effect on the European economy, forcing consumers there to reduce purchases, including those of clothes exported by Bangladesh. As a result, Bangladesh’s exports will decline.

Another official of the Finance Division pointed out that a portion of the garments exported from Bangladesh to Europe were then exported by some European countries to Russia under the Barter Agreement. The ongoing war would disrupt this supply chain.

Bangladesh’s direct exports to Russia currently amounts to about $600 million.

Additionally, according to finance ministry officials, 70% of Bangladesh’s food needs are met by rice, while the remaining 30% depends on wheat.

Bangladesh imports wheat from Russia and Ukraine. If wheat imports are disrupted, the demand for rice in the country will increase, resulting in heightened volatility in the rice market.

The supply of Liquefied Petroleum Gas (LPG), mostly known as cooking gas, is likely to be hit due to the existing crisis.

At present, Bangladesh has a demand of around 1 lakh tonnes of LPG per day which is also fully import-based and reliant on Middle Eastern suppliers.

Industry insiders said that a crisis could arise due to the demand jump in the global market and delays in the shipment from suppliers.

Azam J Chowdhury of Omera, said that while supply was disrupted due to delivery delays, there wouldn’t be any significant impact on the local supply as Bangladeshi operators mostly imported from countries in the Middle East.

“As an impact of war, the price of the products has increased sharply which will affect sales in the local market as people have a fixed purchasing capacity,” he added.

Anup Kumar Sen, head of operations at Orion Gas Ltd, said that as per the Saudi CP rate, cost of Propane and Butane has increased by $137.5 per tonne compared to February.

He also said that they were not getting timely supply due to shortages in the market.

In the current month, however, Bangladesh will import an additional three LNG cargoes to boost supply.

A director at Petrobangla under the condition of anonymity said that they had arranged to ship in four LNG cargoes, but settled for three due to import cost pressure.

“Our LNG supply will remain as usual because we import energy from Middle Eastern countries like Qatar and Oman,” he said.

Normally, Bangladesh imports per MMBtu (Metric Million British Thermal Unit) LNG at $6 under long-term contracts, the price has been rising during the Covid-19 recovery period, reaching $28 per MMBtu.

Due to the cost escalation, the government is pouring huge subsidies to the imports.

In the current fiscal year’s budget, Tk4,000 crore was allocated for LNG subsidies, of which Tk1,000cr has been disbursed so far.

However, Petrobangla applied to the finance minister for a subsidy of around Tk25,000cr.

The Finance Division has suggested hiking gas prices as it is not possible to meet Petrobangla’s demand with the budgetary allocation.

Apart from petrol, Bangladesh is wholly import-dependent for fuel oil. Of the total import, around 80% is refined fuel, which is costlier than crude oil and comes from countries in the Middle East.

Talking about the demand-supply management, ABM Azad, chairman at the Bangladesh Petroleum Corporation (BPC), the body responsible for fuel import, said that they are not sensing any supply disruption right now due to the Russia and Ukraine war.

The BPC has a contract to import 14.90 lakh tonnes of refined fuel oil during the January-June period of this year to meet the growing demand in the country during the irrigation season.

ABM Azad said that there must be an impact on the oil price which is unavoidable for importers like Bangladesh.

“Currently, we are incurring a loss of Tk15 Crore per day selling fuel in the local market. However, the size of the loss will increase due to the war,” said the BPC chairman.

The BPC incurs losses if the price of per barrel refined fuel is above $92 in the international market.

As per Bloomberg consumer data, on Wednesday the price of Brent crude oil reached $111.26 per barrel.

Sources at the BPC said that on 1 March they imported diesel at $115 per barrel.

Talking about the loss adjustment, ABM Azad said that they are trying to handle the shortage with their own capacity as they don’t have another price hike initiative after the last tariff jump in November 2021.

Apart from the daily supply, the country has a total storage capacity of 35-40 days’ fuel.

800MW to come from Adani Godda plant from Dec 16

LNG import to go up 25pc in Dec