Originally posted in The Daily Star on 16 April 2022 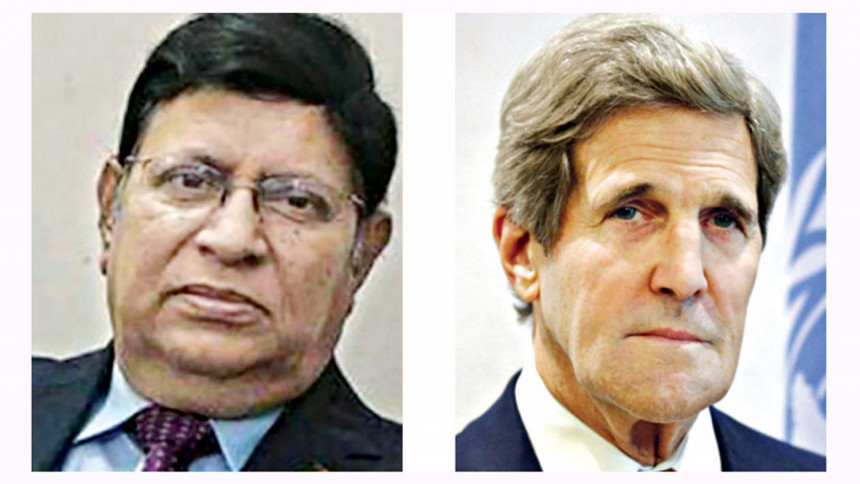 The US has assured Bangladesh of providing assistance in the areas of renewable energy, afforestation and improving coastal embankment.

The pledge came when Foreign Minister AK Abdul Momen held a meeting with US President Joe Biden’s Special Envoy for Climate Change John Kerry in Palau, a Western Pacific Island country, on the sideline of 7th “Our Ocean conference” on April 13-14.

Momen attended the conference, co-hosted by the US and Palau, at the invitation of John Kerry.

Kerry said the US would support Bangladesh in improving and widening embankment at the coastal banks of Bangladesh as part of a climate change adaptation endeavour, according to a foreign ministry statement.

Momen described the potential of Bangladesh in harnessing the blue economy and urged the US support for creating employment in this sector.

Countries joining the Global Methane Pledge commit to a collective goal of reducing global methane emissions by at least 30 percent from 2020 levels by 2030.

Addressing the conference, Momen called for taking decisive and collective actions to ensure the planet’s longevity.

“We must protect, preserve and promote our oceans and ecosystems to save the planet,” he said.

Bangladesh’s foreign minister said the ocean’s ability to provide crucial ecosystem services is being reduced due to climate change, marine pollution, unsustainable extraction of marine resources and physical alterations and destruction of aquatic and coastal habitats and landscapes.

“We must not be afraid of setting a new trajectory for the development of our oceans and seas for a better life,” Momen said.

On the sideline of Bangladesh and Palau, Momen also paid a courtesy call on Palau president Surangel S Whipps Junior. Whipps said Palau is keen to strengthen its bilateral ties with cooperation in the blue economy as well as increasing trade and commerce.

Momen urged Palau to import pharmaceuticals and readymade garments from Bangladesh, increase cooperation in the blue economy and tourism development between the two countries.