Originally posted in The Business Standard on 09 March 2022 With oil prices rallying following US and UK ban on import of Russian oil, the fallout is staring at Bangladesh too in short- and medium-term after its old contracts until June expire.

Brent crude surged to almost $130 a barrel Wednesday, its highest level since 2008 when it hit $147, after the ban was announced, turbocharging already sky-high prices and foreshadowing the risk of inflationary shock.

Inflation on both sides of the Atlantic is expected to soar above 7% and cut purchasing power of consumers that may have a spiralling impact on demand for apparel, Bangladesh’s mainstay in exports.

The unprecedented fuel price hike on the global market has already dealt quite a blow to the Bangladesh Petroleum Corporation (BPC), as it is counting a loss of around Tk63 crore every day, said BPC Chairman ABM Azad on Wednesday.

Any further increase in the loss burden will only make it tougher for the state-owned corporation to pay import bills and meet operating costs, he added. 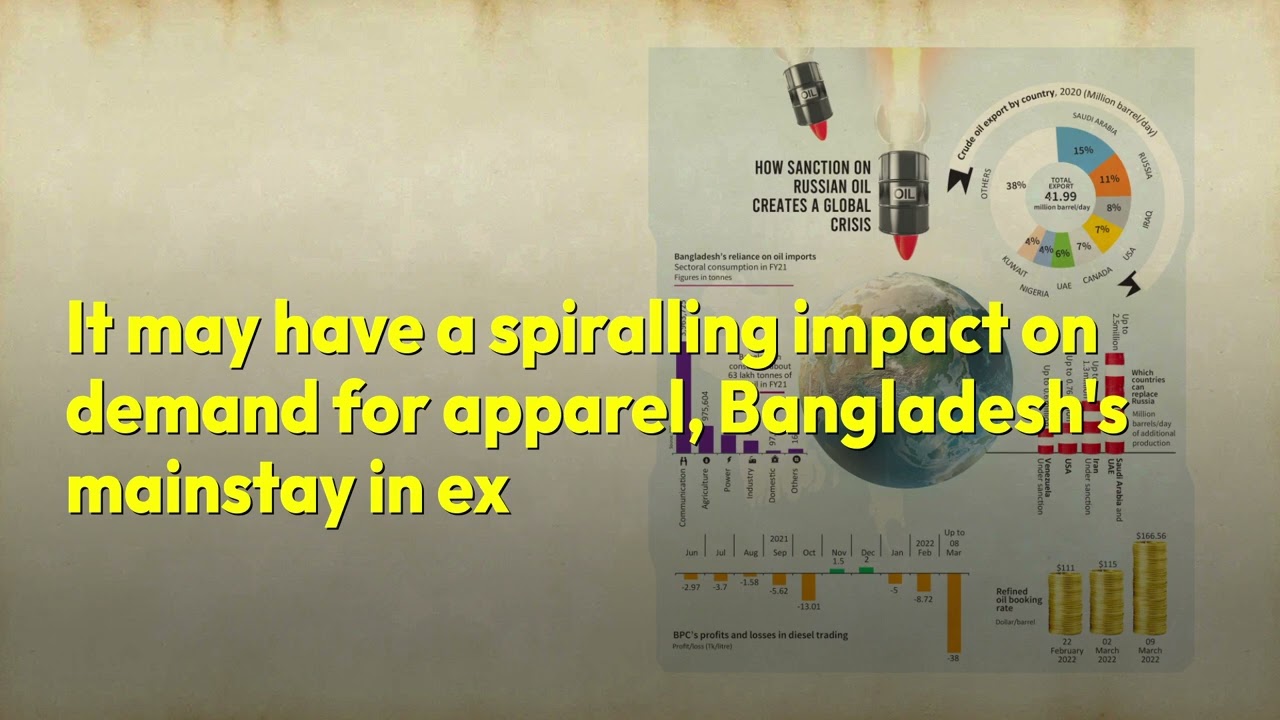 Bangladesh’s subsidy on oil is sure to rise unless it wants to pass the buck onto the people. Both options have repercussions – one on the fiscal side and the other on the misery of the general mass.

Russia is the world’s top exporter of crude and oil products combined, at around 7 million barrels per day (bpd) or 7% of global supply.

JP Morgan predicts oil could hit a record $185 a barrel by the end of 2022 if disruption to Russian exports lasts that long.

Bangladesh’s subsidy on oil would increase.

A ban on Russian oil would further slow the nascent global recovery from the coronavirus pandemic.

Preliminary calculations by the European Central Bank (ECB) suggest that war could cut eurozone growth by 0.3 to 0.4 percentage points this year in a baseline scenario and 1 percentage point in case of a severe shock.

The US, faced with the Ukraine crisis and rising oil price, is now biting the bullet by looking at the emergency options of lifting the ban on Iran and Venezuela to bring online their oil and also at urging OPEC+ to augment supply. But both are tricky paths.

The Saudi Crown Prince Mohammed bin Salman and the UAE’s Sheikh Mohammed bin Zayed al Nahyan have been “unavailable to Joe Biden” after US requests were made for discussions.

The Biden administration’s hardline on human rights, especially regarding the killing of the critic of the Saudi regime and journalist Jamal Khashoggi, has given the kingdom an upper hand this time when the US looks towards higher output from Saudi Arabia to counter Russian oil production and supply cuts.

And lifting the Iran ban would require an urgent nuclear deal. It is a great time for Iran so far squeezed off its economic life by the rough embargo to bask in the glory of oil, once again.

Although the US oil ban is still not as encompassing as the ban on Iran since the EU relies heavily on Russian energy, and Russia’s largest oil buyers China and India have not followed suit.

And Bangladesh, in theory, can still buy oil from Russia probably at a cheaper-than-the-market rate, but this might invite the wrath of the West.

Sources at the BPC said the import and supply cost of one litre of diesel is around Tk118 but the retail tariff is Tk80.

Therefore, the BPC incurs a loss of Tk38 for retailing one litre of diesel in the local market while the total volume of losses the corporation incurs every day for retailing different types of fuel oil currently stands at Tk63 crore.

The last time the corporation made a price adjustment was on 4 November last year, when the prices of diesel and kerosene were raised by around 23% to Tk80 per litre from Tk65. The price of Brent crude was around $82 per barrel that day.

But, Brent crude has continued to surge in the wake of the Russian invasion of Ukraine and its price climbed to $124.23 per barrel on Wednesday.

The price is even higher for the BPC as it imports refined fuel oil. The last price that was booked on Tuesday was $166.56 a barrel, said sources at the BPC.

On 22 February this year, two days before the war broke out, the booking price of one barrel of refined fuel was $111.

Generally, the price of refined fuel oil is set as per the Plats rate that considers the previous and following two days of the booking date’s rate.

Since 24 February, when Russia invaded Ukraine, the BPC has imported 1,50,000 tonnes of fuel oil.