Editor’s Note: This article was updated in January 2022.

The latest climate science is clear: Limiting global warming to 1.5 degrees C (2.7 degrees F) is still possible. But to avoid the worst climate impacts, global greenhouse gas (GHG) emissions will need to drop by half by 2030 and reach net-zero around mid-century.

Recognizing this urgency, a rapidly growing number of national government, local government and business leaders are making commitments to reach net-zero emissions within their jurisdictions or businesses. To date, over 80 countries have communicated such “net-zero targets,” including the world’s largest emitters (China, the United States, the European Union and India). On top of that, hundreds more regions, cities and businesses have set targets of their own. 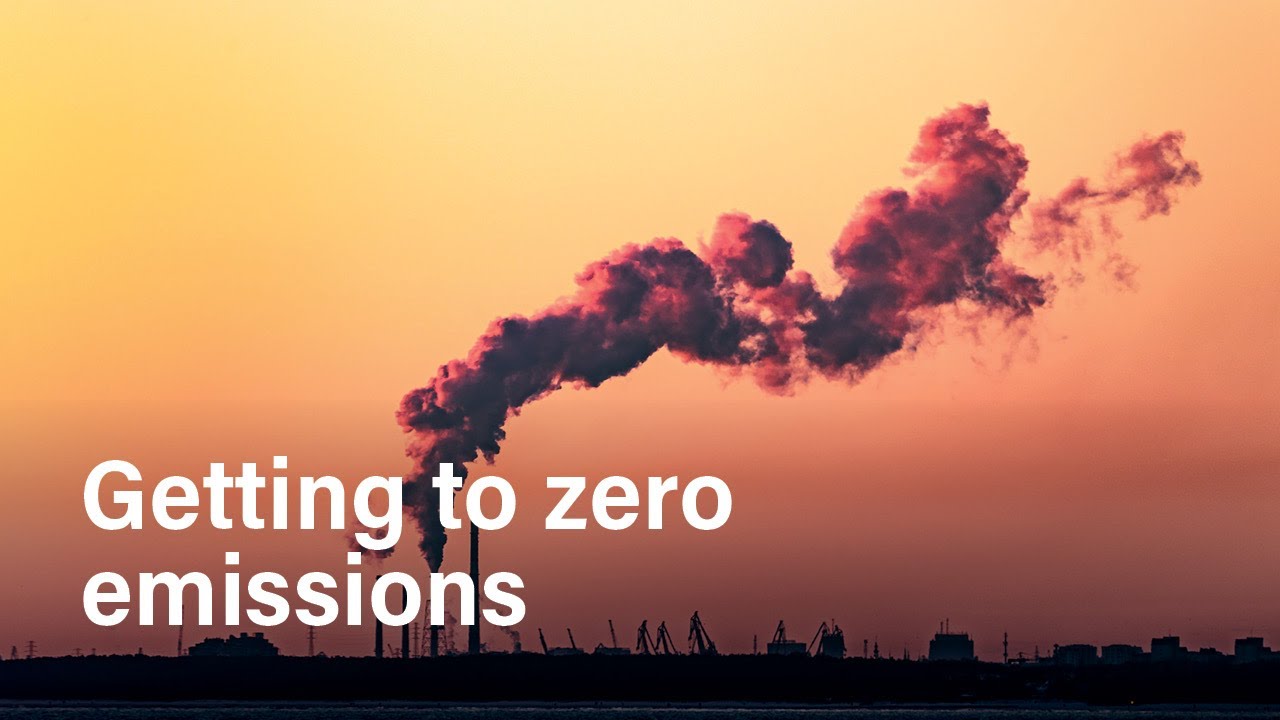 But what does a net-zero target mean, what’s the science behind net-zero and which countries have already made such commitments? Here are eight common questions and answers about net zero:

1. What Does It Mean to Reach Net-Zero Emissions?

Net-zero emissions will be achieved when all GHG emissions released by human activities are counterbalanced by removing GHGs from the atmosphere in a process known as carbon removal.

First and foremost, human-caused emissions (such as those from fossil-fueled vehicles and factories) should be reduced as close to zero as possible. Any remaining GHGs should then be balanced with an equivalent amount of carbon removal, which can happen through things like restoring forests or using direct air capture and storage (DACS) technology.

2. When Does the World Need to Reach Net-Zero Emissions?

The latest science suggests that reaching the Paris Agreement’s temperature goals will require reaching net-zero emissions on the following timelines: 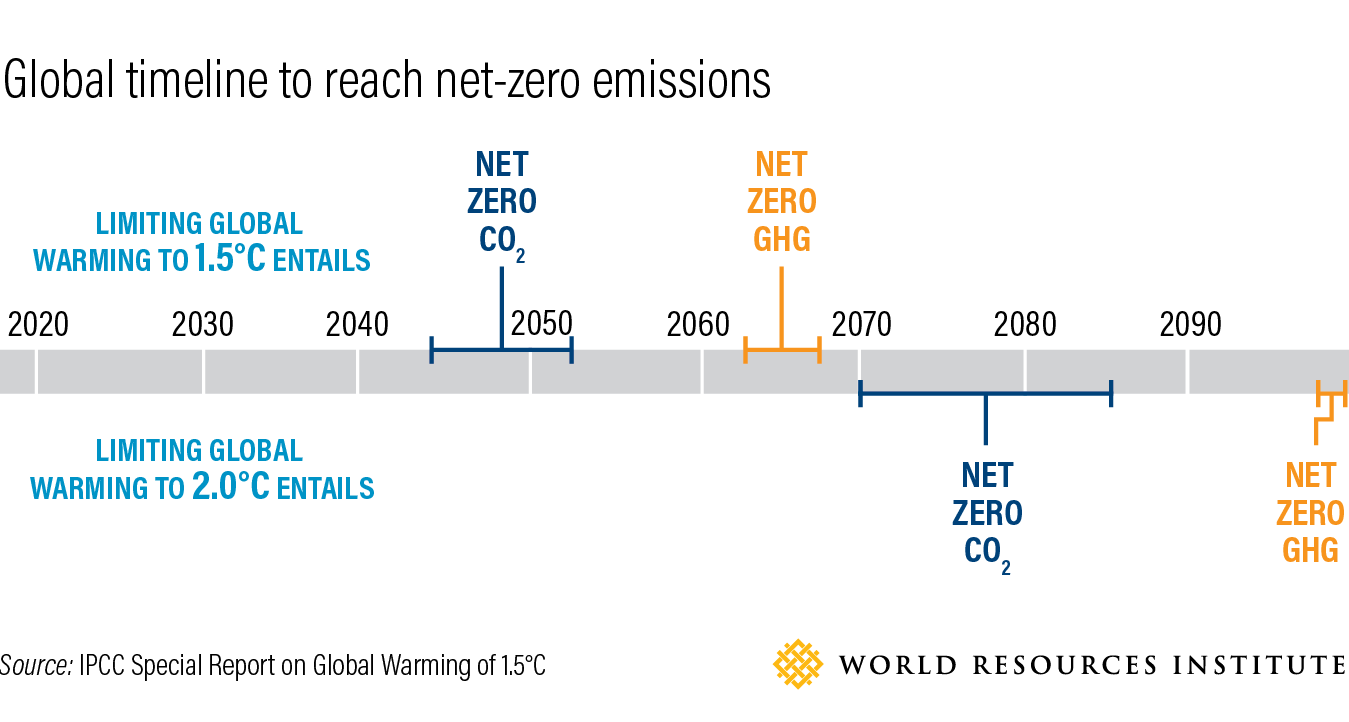 The Special Report on Global Warming of 1.5˚C, from the Intergovernmental Panel on Climate Change (IPCC), finds that if the world reaches net-zero emissions by 2040, the chance of limiting warming to 1.5 degrees C is considerably higher. The sooner emissions peak, and the lower they are at that point, the more realistic achieving net zero becomes. This would also create less reliance on carbon removal in the second half of the century.

This does not suggest that all countries need to reach net-zero emissions at the same time. The chances of limiting warming to 1.5 degrees C, however, depend significantly on how soon the highest emitters reach net-zero emissions. Equity-related considerations — including responsibility for past emissions, equality in per-capita emissions and capacity to act — also suggest earlier dates for wealthier, higher-emitting countries.

Importantly, the time frame for reaching net-zero emissions is different for CO2 alone versus for CO2 plus other GHGs like methane, nitrous oxide and fluorinated gases. For non-CO2 emissions, the net zero date is later because models suggest that some of these emissions — such as methane from agricultural sources — are more difficult to phase out. However, these potent but short-lived gases will drive temperatures higher in the near-term, potentially pushing temperature change past the 1.5 degrees C threshold much earlier.

Because of this, it’s important for countries to specify whether their net-zero targets cover CO2 only or all GHGs. A comprehensive net-zero emissions target would include all GHGs, ensuring that non-CO2 gases are also reduced.

3. What Needs to Happen to Achieve Net-Zero Emissions?

Policy, technology and behavior need to shift across the board. For example, in pathways to 1.5 degrees C, renewables are projected to supply 70-85% of electricity by 2050. Energy efficiency and fuel-switching measures are critical for reducing emissions from transportation. Improving the efficiency of food production, changing dietary choices, halting deforestation, restoring degraded lands and reducing food loss and waste also have significant potential to reduce emissions. 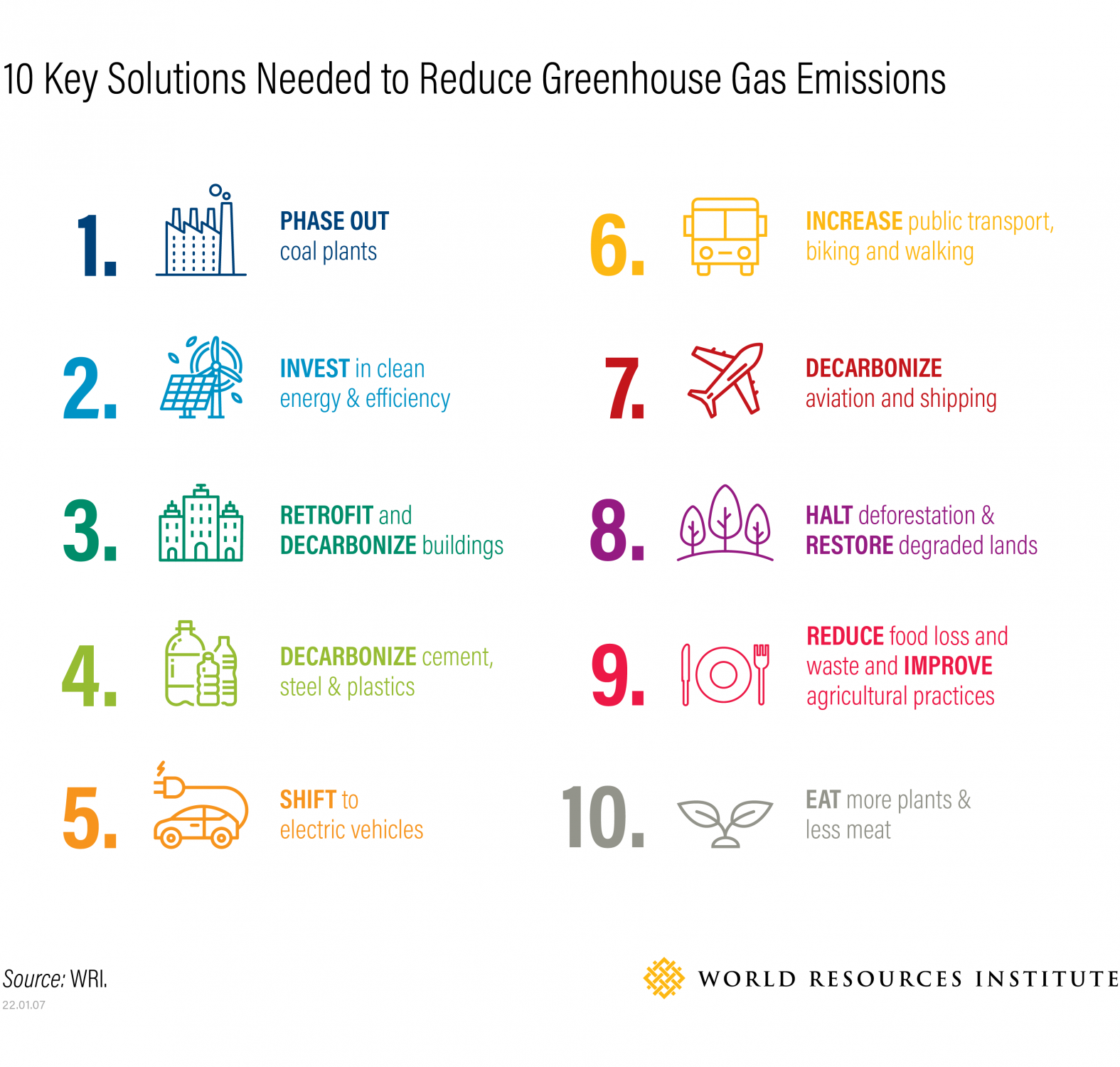 It is critical that the structural and economic transition necessary to limit warming to 1.5 degrees C is approached in a just manner, especially for workers tied to high-carbon industries. The good news is that most of the necessary technologies are available and increasingly cost-competitive with high-carbon alternatives. Solar and wind now provide the cheapest power available for 67% of the world. Markets are waking up to these opportunities and to the risks of a high-carbon economy, and shifting accordingly.

Investments in carbon removal techniques are also necessary. The different pathways assessed by the IPCC to achieve 1.5 degrees C all rely on carbon removal to some extent. Removing CO2 from the atmosphere will compensate for emissions from sectors in which reaching net-zero emissions is more difficult, such as aviation. Carbon removal can be achieved by several means, including through land-based approaches and technological approaches.

4. Is the World on Track to Reach Net-Zero Emissions on Time to Avoid the Worst Climate Impacts?

No — despite the enormous benefits of climate action, progress is happening far too slowly for the world to hold temperature rise to 1.5 degrees C (2.7 degrees F). 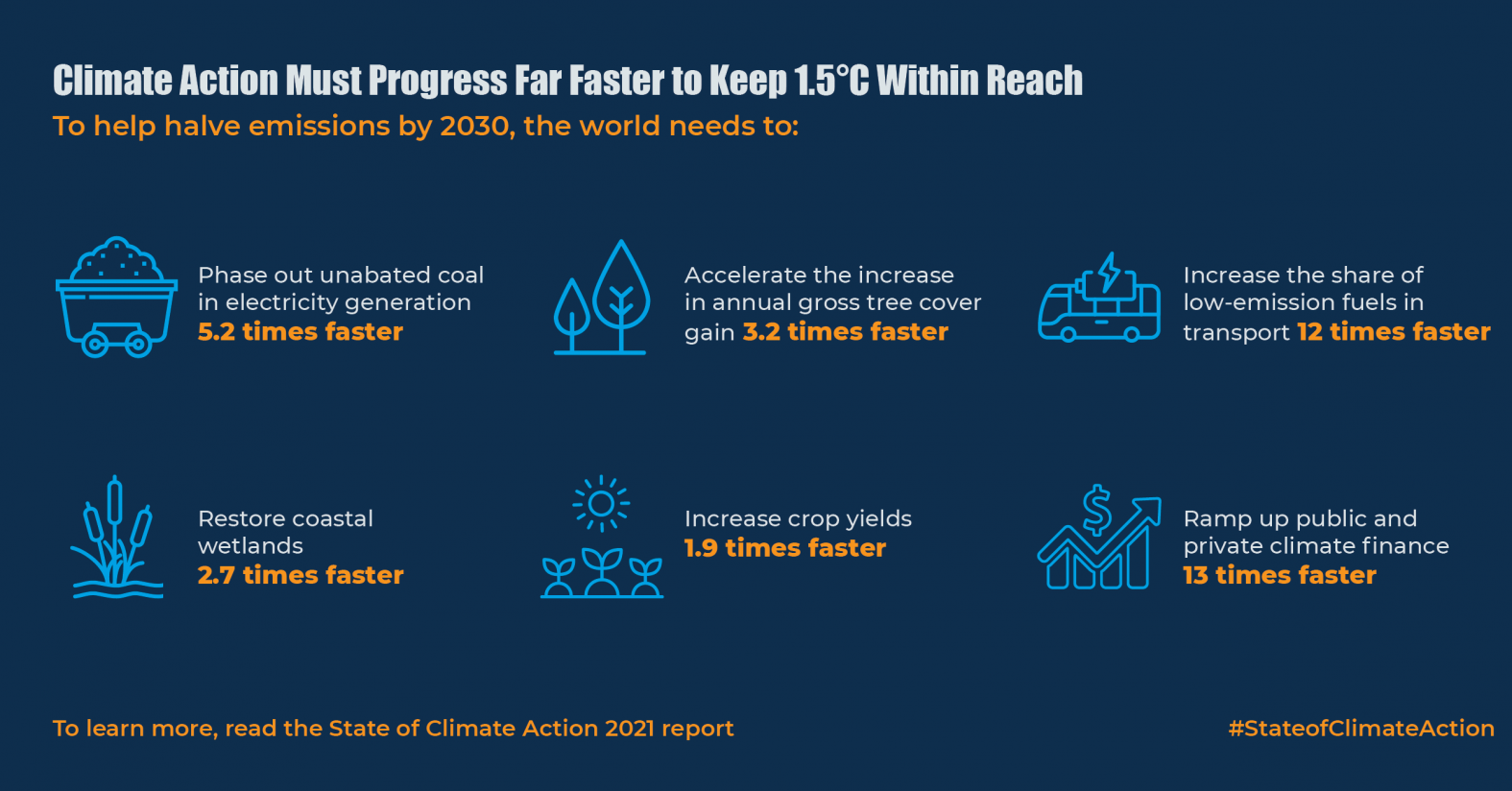 Significant gains have been made to reduce emissions, such as increasing the share of renewables in electricity generation. However, efforts to phase out unabated coal remain well off-track and must decline five times faster by 2030. Similarly, the share of electric vehicles in light-duty vehicle (LDV) sales hit 4.3% in 2020, increasing at a compound average growth rate of 50% over the last five years. Although promising, such progress still needs to accelerate significantly to help reduce the transport sector’s emissions and reach 75-95% of LDV sales by the end of this decade, a target aligned with limited warming to 1.5 degrees C.

Additionally, action must be taken to reverse course in cases, where change is at a standstill or headed in the wrong direction entirely. For instance, the world needs to drastically slow deforestation and increase tree cover gain three times faster by 2030.

5. How Many Countries Have Net-Zero Targets?

Global momentum for setting net-zero targets is growing quickly, with key economies like China, the United States and the European Union articulating such commitments. Bhutan was the first country to set a net-zero target in 2015. Now over 80 countries, representing more than 70% of global emissions, are covered by a net-zero target.

Climate Watch’s Net-Zero Tracker shows how these targets were set, such as through nationally determined contributions (NDCs), long-term low GHG emissions development strategies (long-term strategies), domestic laws, policies or high-level political pledges from heads of state or other cabinet members. The tracker also includes information on the scope of the targets, providing information about the GHGs and sectors covered by each, the extent to which the target relies on international offsets and more.

6. Does the Paris Agreement Commit Countries to Achieving Net-Zero Emissions?

In short, yes. Specifically, the Paris Agreement sets a long-term goal of achieving “a balance between anthropogenic emissions by sources and removals by sinks of greenhouse gases in the second half of this century, on the basis of equity, and in the context of sustainable development and efforts to eradicate poverty.” This concept of balancing emissions and removals is akin to reaching net-zero emissions.

The Glasgow Climate Pact, signed at COP26 and marking the five year anniversary of the Paris Agreement, urges countries to move “towards just transitions to net zero emissions by or around midcentury, taking into account different national circumstances.” To this end, the pact encourages parties “that have not yet done so to communicate…long-term low greenhouse gas emission development strategies” that set the country on a pathway toward net zero. The shift from “in the second half of this century” to “by or around mid-century” reflects a notable increase in perceived urgency.

7. Why and How Should Countries Align Their Near-Term Emissions-Reduction Targets with a Net-Zero Emissions Goal?

Countries typically set net-zero targets for around 2050 — nearly three decades from now. However, in order to ensure that the country gets on the right track toward realizing this ambition, the long-term objective must guide and inform near-term action today. This will help avoid locking in carbon-intensive, non-resilient infrastructure and technologies. Countries can also cut near- and long-term costs by investing in green infrastructure that will not need to be phased out later, designing consistent policies and sending strong signals to the private sector to invest in climate action.

Under the Paris Agreement, countries agreed to submit climate plans every five years, known as nationally determined contributions (NDCs). NDCs, which currently target 2030, are an important tool to align near- and long-term goals. When informed by a country’s long-term vision, these documents can help governments implement the policies necessary in the nearer term to realize an ambitious mid-century objective.

Many countries with net-zero targets are beginning to incorporate them directly into their near-term NDCs, particularly now that the Glasgow Climate Pact “notes the importance of aligning nationally determined contributions with long-term low greenhouse gas emission development strategies.” Ultimately, it is critical that countries act today and set near-term plans that will put them on the right track toward realizing their long-term objectives.

8. Are Net-Zero Targets a Form of Greenwashing?

No, but they can be if used as an excuse to not take bold climate action in the near-term.

Although net-zero targets continue to gain traction with governments and companies, skeptical voices have emerged, from academic journals to campaign groups to Greta Thunberg’s speech in Davos. Critiques of net-zero targets include:

a. The “net” aspect of net-zero targets could dampen efforts to rapidly cut emissions.

Critics are concerned that this could foster an overreliance on carbon removal, allowing decision-makers to use net-zero targets to avoid emission reductions in the near-term. Decision-makers can address this concern by setting ambitious gross reduction targets (targets that do not rely on removals) alongside their longer-term net reduction targets.

b. Some countries’ net-zero targets rely on purchasing emissions reductions, delaying reductions within their own boundaries.

Some countries are setting net-zero targets that rely on investing in or paying for emissions reductions from other countries to use toward their own targets. There’s concern that government leaders might use this strategy to avoid reducing their own emissions in the long-term. Decision-makers can address this concern by setting deep emission reduction targets that explicitly avoid or limit using offsets to achieve their goals.

Today’s infrastructure can last for decades and have a major impact on mid-century targets. Decision-makers must take this into account by establishing near- and mid-term milestones for their path to net-zero emissions, including by setting ambitious 2030 emission reduction targets as part of their NDCs. NDCs are subject to transparency and accountability mechanisms under the Paris Agreement that can foster implementation in the near term, which is critical for a long-term net-zero goal to be credible.

In short, net-zero commitments must be robust to be effective and advance climate action. Countries must take concrete steps to ensure this if they are to effectively address the challenge at hand. 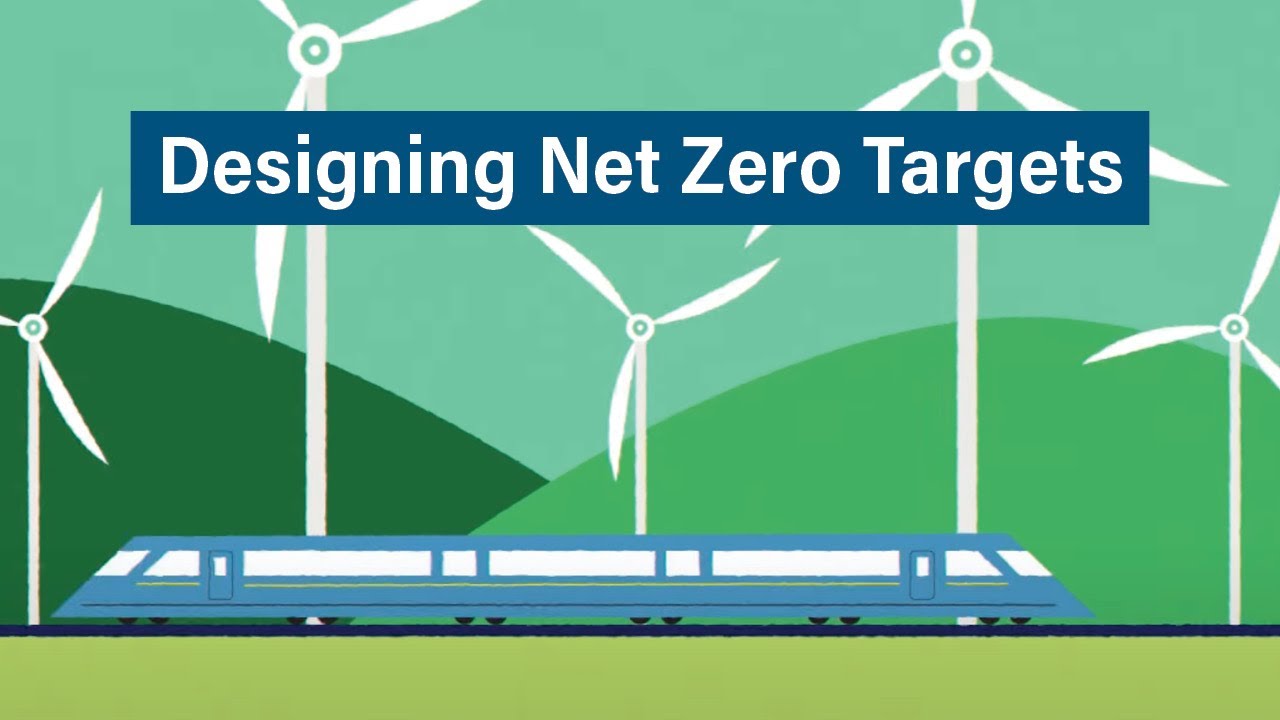