The Ministry of Power, Energy, and Mineral Resources (MoPEMP) has prepared a draft master plan for the Energy and Power sector titled Integrated Energy and Power Master Plan (IEPMP). The plan is coming out at such a time (March, 2023), when the sector is going through a short to medium-term crisis. Given the global goal of clean energy for achieving net zero commitments by 2050, the government has taken various measures. The Prime Minister has announced a target of 40 per cent of renewable energy by 2041 when Bangladesh aspoire to become a high-income country. Therefore, it is crucial to review the IEPMP to understand how it will achieve the clean energy targets amid contemporary challenges and strategies to be adopted for the power and energy sector keeping in mind the issue of energy security in the coming years. CPD’s study shows that there are many scopes for improvement of the draft plan to make it compatible with the decarbonisation initiative.

The new integrated plan aims to set forth a long-term energy plan covering every sector and energy source in consideration of the present conditions in Bangladesh and the global momenta toward low-carbonization and/or decarbonization. The technical support is provided by the Japan International Cooperation Agency (JICA) as like those in earlier three plans (PSMP 2005, 2010 and 2016).

The new draft plan is found to apply rigorous methodology in order to understand the energy demand, energy-mix, energy efficiency and transmission and distribution of energy. The plan applied the following: (a) uses ‘Bottom up’ sectorial approach and wide range of variables; and (b) takes account of three different scenarios – reference scenario (REF), advanced technology scenario (ATS), and Net Zero Scenario (NZS). The plan considers three scenraios on economic growth by 2050- (a) GDP growth projection based on IMF long term projection (IMF ext); (b) GDP growth projection based on the perspective plan (PP 2041); and (c) GDP growth projection in between “IMF ext” and “PP2041). It has considered PP 2041 as the main case for GDP projection for 2041 and 2050. CPD study found the GDP projection based on PP2041 highly ambitious in the current context, Hence, the estimated power demand of 90 GW by 2050 seems difficult to attain. Considering such a high target of power demand makes the renewable energy- based power generation target (40 per cent by 2041) unrealistic.

The new plan still lacks room for the renewable energy based power generation which continue to provide fossil fuel- based power generation system a major source of energy in the coming decade. A rational demand projection for power and target to achieve 40 per cent from renewable energy of that projection will be reasonable. The IEPMP also promotes ammonia and green hydrogen, which are yet to be tested and require a hefty investment.

In this context, the Centre for Policy Dialogue (CPD) organised a Media Briefing titled “Integrated Energy and Power Master Plan (IEPMP) (Interim Report): Can it address the clean energy targets?” on Thursday, 22 December 2022. 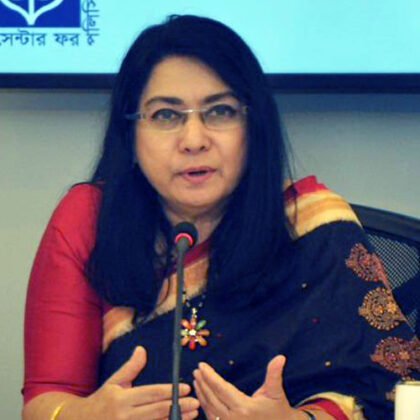 Dr Fahmida Khatun, Executive Director, CPD, chaired the session and gave welcome remarks. She said that the IEPMP avoids the discussion of clean energy perspectives in detail. “It does not have a conclusive scenario on power and energy demand based on major policies,” said the Executive Director.

In his keynote presentation, Dr Khondaker Golam Moazzem, Research Director of CPD, said that the IEPMP formulation process is found to be distinctive in several accounts. A specialized research organisation has provided technical support, followed by a consultative process. However, it has not reached the level of partnership between all concerned stakeholders. However, there is much scope for improvement in the draft master plan for Energy and Power Sector.

“The plan considers a carbon-neutral economic perspective though it is not fully reflected in operational issues,” said the Research Director. The plan, though found relatively rigorous,still cannot come out from a few biasness. The GDP estimate based on Perspective Plan 2041 made the whole exercise unreliable. To reduce the biasness, an alternate scenario ‘in-between’ is proposed, which also seems high and rather the IMF Ext. scenario seemed more appropriate.

The commitment of generating “40 per cent of electricity from Renewable Energy (RE)” has been shifted to “up to 40 per cent from cleaner energy”. This type of shift in the usage of jargon and definition confuses and weakens the RE argument. As assumingly, clean energy includes green ammonia co-firing and hydrogen-based power plants.

An alternate scenario called ‘Renewable Energy Scenario’ needs to be set, and necessary modeling and exercise must target 40 per cent renewable energy by 2040. The plan, directly and indirectly, promotes coal and coal-based energy in the disguise of advanced technology, which is also not appreciated.

CPD recommended that a clean energy scenario in the power and energy sector can be resource efficient, generate more power, and save subsidy allocation. Government can even save financial resources by phasing out the subsidy and capacity charge in fossil fuel based power generation, and utilize those resources in investing in renewable energy. The capacity payment and the tariff at which the Power Development Board (PDB) buys power from IPPs should be reviewed.

LNG-based power generation should not be encouraged further, and dependency on long-term LNG contracts should also be reduced. Reducing the LNG tariff will only encourage additional LNG imports. Such tariff can generate revenues for investing in renewables.

The IEPMP should emphasise more on gas exploration in domestic gas fields. Government agencies. Similarly Bangladesh Power Development Board (BPDB) and Sustainable and Renewable Energy Development Authority (SREDA) should aggressively look for foreign financers and investors in the renewable energy sector. A more sectoral approach can be taken to accelerate renewable energy-based power generation in Bangladesh, such as promoting the renewable energy portfolio in the RMG sector in Bangladesh. An implementation plan for rooftop solar in primary schools and solar irrigation systems is also required.

Fossil fuel-based power plants in retirement should not be extended further under the Quick Enhancement of Electricity and Energy Supply (Special Provision) Act 2010 and the existing IPP contracts should also be reviewed. This will save resources in terms of capacity payment and subsidy. Additionally, it will save the foreign exchanges required for importing fuels.

Proper implementation of the existing Strategic Environment Assessment (SEA) guidelines should be established. Enough budgeting and costing for numerous technologies to conduct to complete feasibility analysis, impact evaluation, and reporting should be ensured.

An open-floor Q&A session with journalists from both print and electronic media followed the discussion. The study team says that it is challenging to promote renewable energy due to discriminatory practices of the government. Renewable energy is cheaper than other energy mixes, but the costs escalate because the private investors have to pay for the land where the renewable energy will be produced. A competitive price is required to make a valid comparison between all the energy sources. High subsidy allocation in Energy Sector will reduce the subsidy allocation in other social sectors. The study team including the Research Director, Ms Helen Mashiyat Preoty and Mr Shiyan Sadik both Research Associates and Ms Moumita A Mallick, Programme Associate responded to the questions.